Thank you for your patience while we retrieve your images.

I was walking through the stunningly scenic cematario overlooking Lake Atitlan in the Guatemalan Highland village of Solala. The tombs were awash in the vibrant hues of the Maya….

I think I even muttered to my friend Juan, “I feel as if I died and have gone to heaven”. This statement made both from the rich colors that were challenging me photographically as well as the setting that featured jaw dropping vistas of Lago De Atitlan and the towering volcanoes surrounding the lake.

Somehow, I became aware of a young boy throwing a brightly colored ball up into the sky… Each effort yielding even higher throws.

After frantically composing and taking numerous images of this boy framed against the volcano and lake below (I saw this as the perfect image, one I have been searching, dreaming of) Juan and I approached him.

I was curious as to why he was playing in a cemetery, Juan helped with the translation…. With a face that looked as if he had lost his best pal we sat and talked.

“My Dad, my Dad and I used to see who could throw the ball higher… He always won.

My Dad is dead now and I am trying to throw the ball up to him, up to where mi madre says he is now”.

“I want to play with mi Padre, I want him to throw the ball again… I want my Papa.”

Going down the hill later that afternoon in the “Bus de Pollo” I couldn’t help but hear my little friend’s voice echo across the lake over and over.
I resolved the next day to put my camera down… With thousands of shots firmly locked away digitally, I had been trying to throw the ball one last time, hoping to throw it the highest I had ever thrown it,
To get that one image.

My hope is that my little amigo found some peace that day,
Maybe he got that one image of his Dad and he has
Comfort.
© Lance Kinney Photography 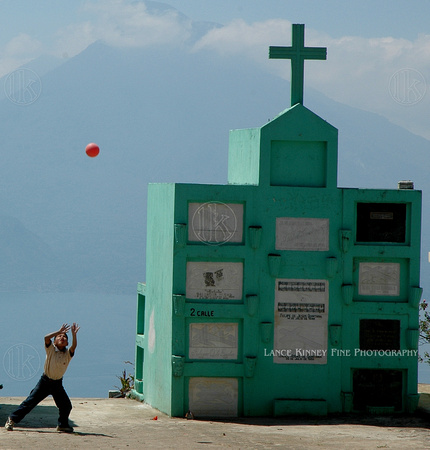